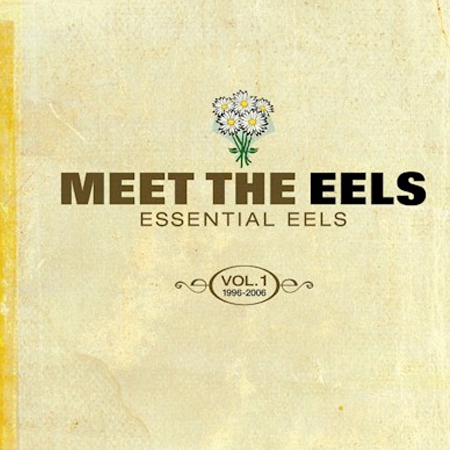 The EELS are one of music's most acclaimed and idiosyncratic enterprises, accomplishing what The New Yorker calls "that rarest thing in contemporary pop: a unique sound." The ever-changing lineup of musicians that play the songs of singer/songwriter/multi-instrumentalist Mark Oliver Everett (aka E), unveils both its first best of compilation, Meet The EELS: Essential EELS Vol. 1

Meet The EELS: Essential EELS Vol. 1 spans the first decade of the EELS with 24 selections. The CD opens with four tracks from the band's 1996 debut Beautiful Freak, two tracks from the Eels' highly acclaimed second album 1998's Electro-shock Blues follow plus a previously unreleased Jon Brion remix of "Climbing to The Moon."

Four songs from 2000's Daisies Of The Galaxy, which NME dubbed "a masterpiece in almost every way," are represented on the Essentials album plus three tracks from 2001's Souljacker, which Time Magazine crowned as one of the best albums of the year, was acclaimed overseas with NME calling it "downright brilliant" and the London Sunday Times named it Album Of The Year, writing that "the conventional wisdom that (the earlier album} Electro-shock Blues was E's masterpiece will have to be reassessed: it was clearly just one of his masterpieces."