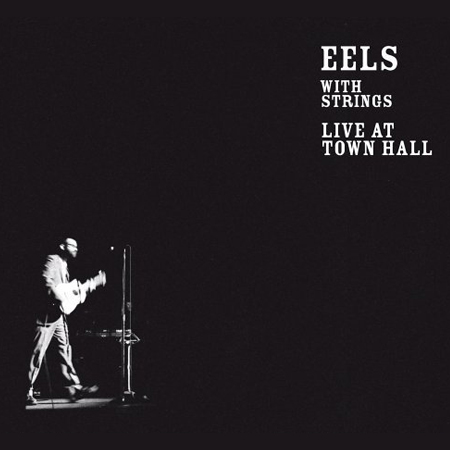 You never know what you'll get when you attend an EELS concert. One year it's vocoders and synthesizers, the next it's gritty garage rock. None of this is designed for the sake of versatility so much as it is for answering the deep-rooted creative needs of EELS leader Mark Oliver Everett, aka E.

"I'm not going to make a polka album just because I can. It's not in me, not this year, anyway, and I'm not doing different things to try to dazzle the audience with my wide horizons. There's just some stuff in me that needs to come out," says the man The New Yorker describes as "a hypertalented misfit."

Recorded the evening of June 30th, 2005, after a hectic day that found the EELS loading into Town Hall at 6 a.m., having just played Boston's Sommerville Theater the night before, and then performing on The Late Show with David Letterman the very afternoon of the Town Hall show, EELS with strings Live at Town Hall is the first properly released EELS live album (two earlier limited edition live CDs were released through the EELS website and are now sought-after collectors items). Besides nineteen unique takes on songs spanning the entire EELS catalogue, Live at Town Hall also features EELS with strings taking on Bob Dylan's "Girl From The North Country," Johnny Rivers' "Poor Side Of Town," and The Left Banke's "Pretty Ballerina."

1. Blinking Lights (For Me)
2. Bride of Theme from Blinking Lights
3. Bus Stop Boxer
4. Dirty Girl
5. Trouble with Dreams
6. The Only Thing I Care About
7. My Beloved Monster
8. Pretty Ballerina
9. It's a Motherfucker
10. Flyswatter
11. Novocaine for the Soul
12. Girl from the North Country
13. Railroad Man
14. I Like Birds
15. If You See Natalie
16. Poor Side of Town
17. Spunky
18. I'm Going to Stop Pretending that I Didn't Break Your Heart
19. Suicide Life
20. Losing Streak
21. Hey Man (Now You're Really Living)
22. Things the Grandchildren Should Know